Keeping up with the arcade theme, my next project is a Skee-ball machine.

As with any project, the best way to succeed is a good design to work from. As such the first step was to define the parameters that this project had to meet in its design. The parameters I worked with were as follows:

With these requirements in mind the next step was to create a model in Solidworks to get the dimensions right and have them to work off of while building the machine.  The following are the renderings of the model I came up with. 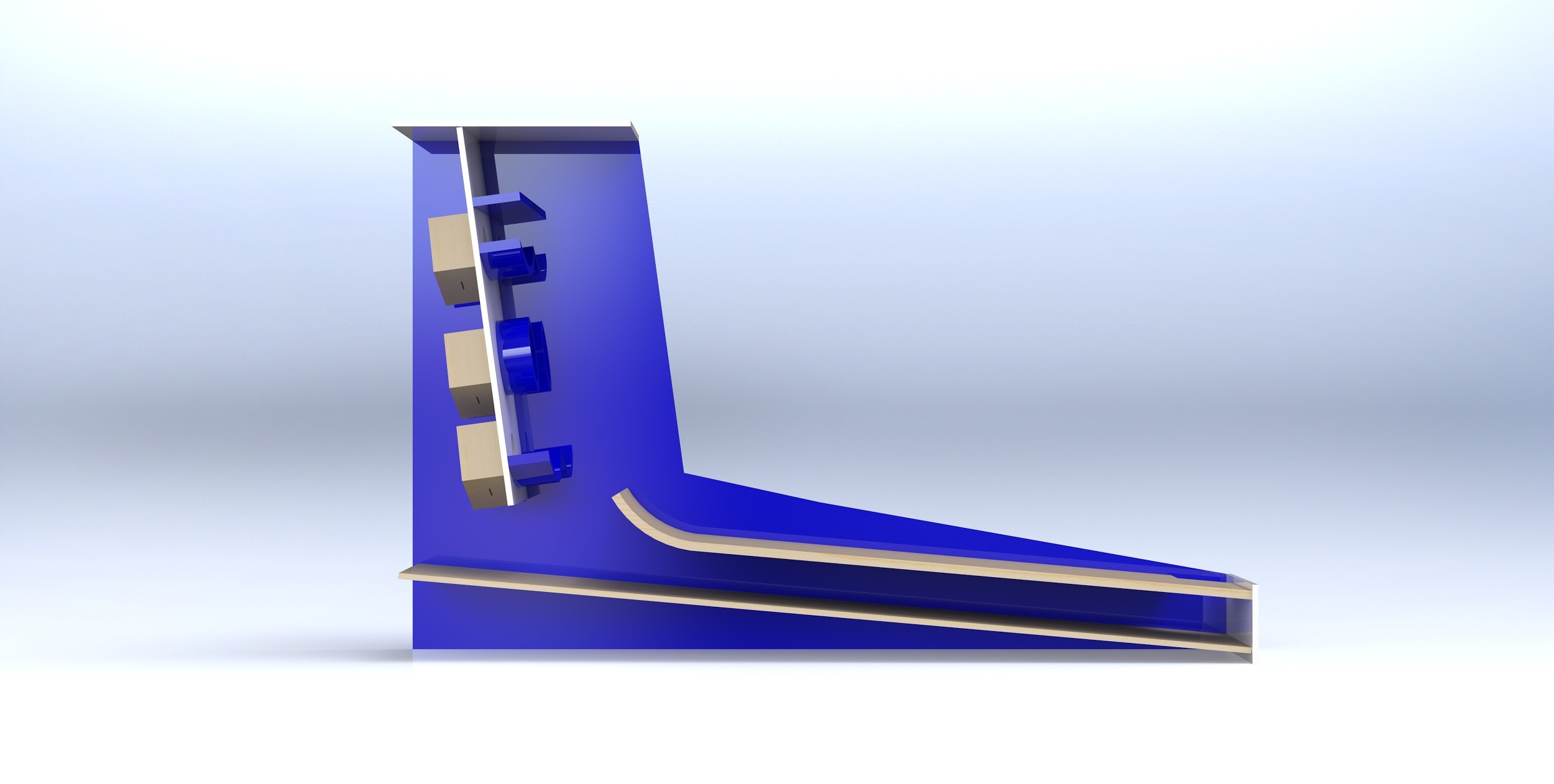 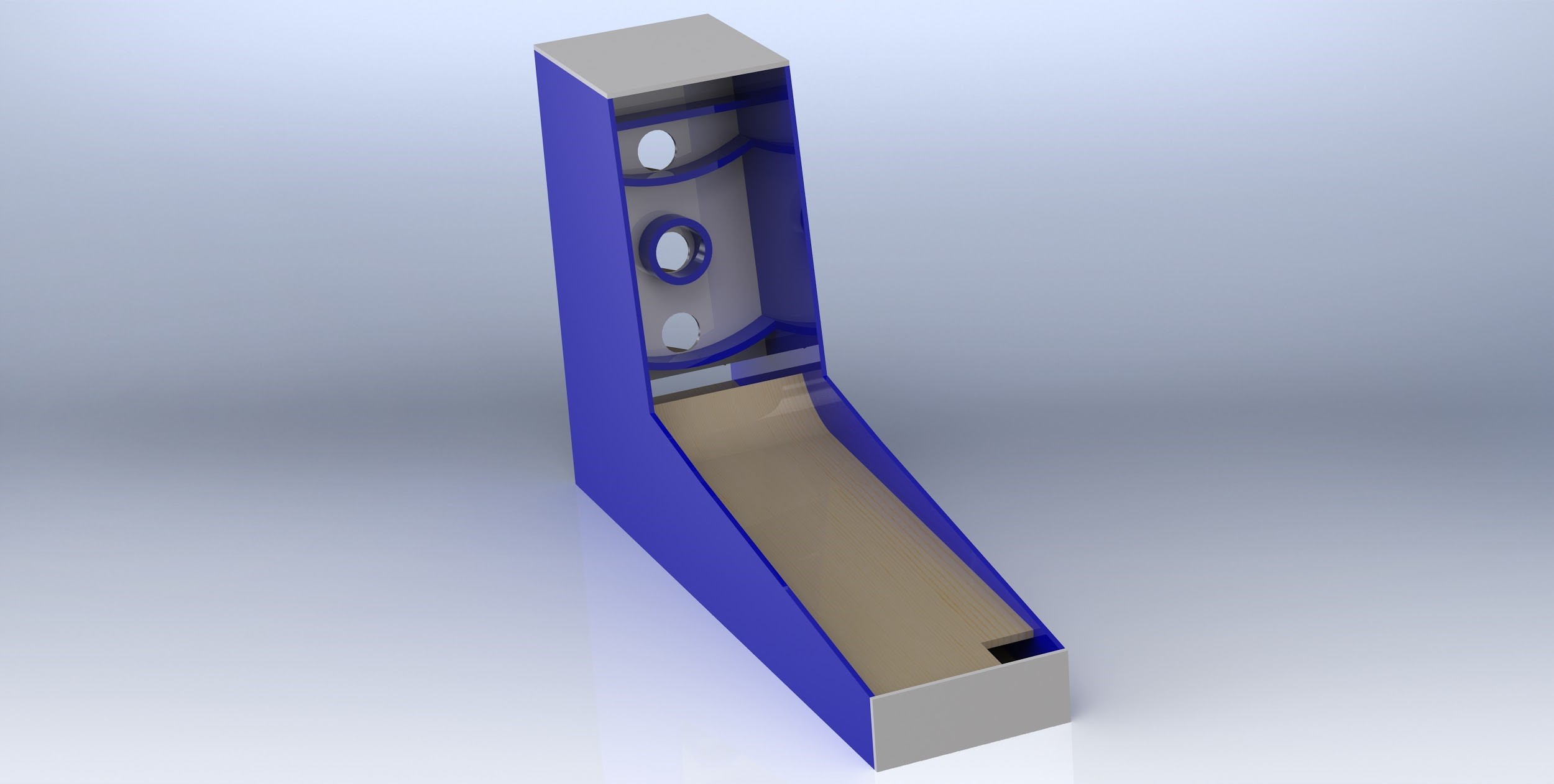 One thing about this design that you may find yourself asking at first glance is, “How are you going to create those bends in ¾” plywood?” The answer is a very simple technique called Kerfing. This is where you take a piece of wood and run it over a table saw without cutting all the way though to create a dado in the wood and you repeat this processing moving the board over a given distance depending on the thickness of the wood and the radius of the curve. To figure out the parameters for this technique I will be using the site, https://www.blocklayer.com/kerf-spacing.aspx.

If you are looking at this project as something you would like to build for yourself, the files can be found on my GrabCad account here: https://grabcad.com/library/skee-ball-project-1. There are a few notes about the model though, it is only about 90% identical to what the actual final build is like for a couple reasons and the differences thus far are as follows.

Once the Model was finished the next step was to start building. To start I layed together two pieces of 3/4in plywood on top of each other, squared them up and screwed them together. This was done so that I got the two side pieces as close to identical as possible 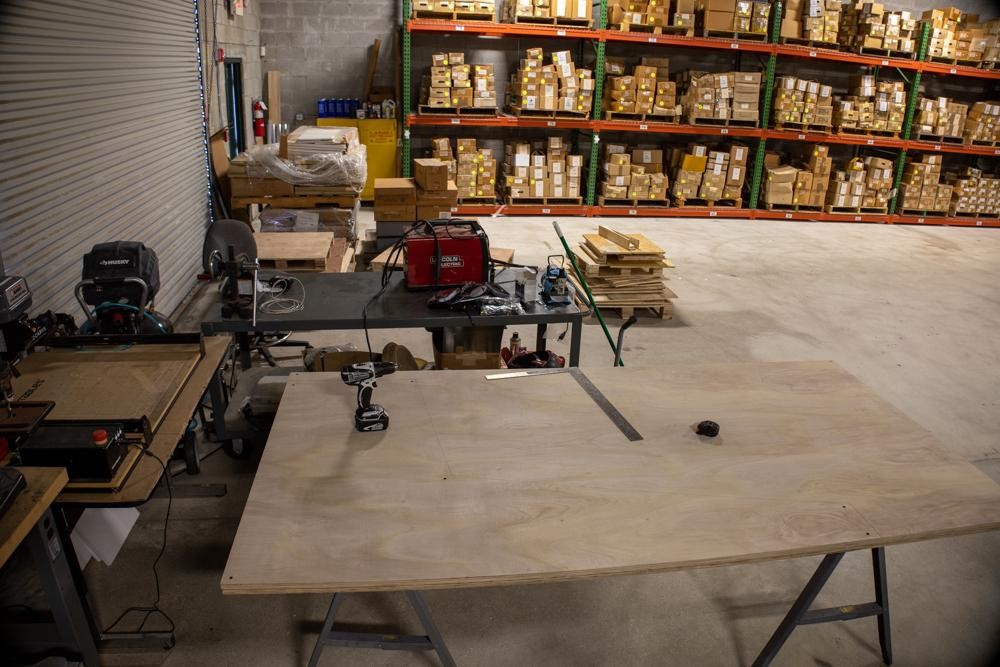 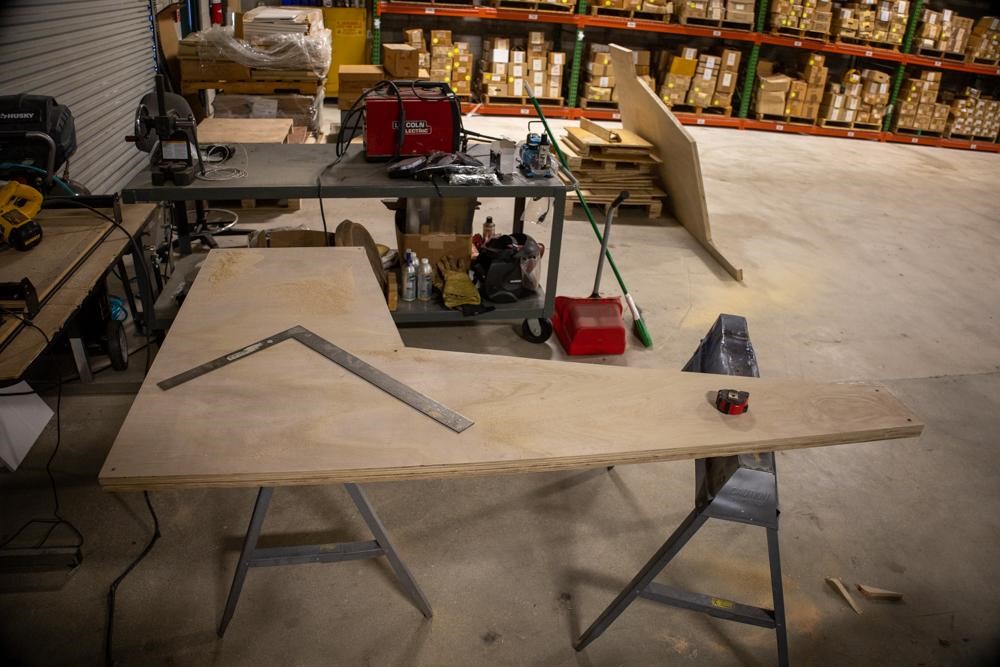 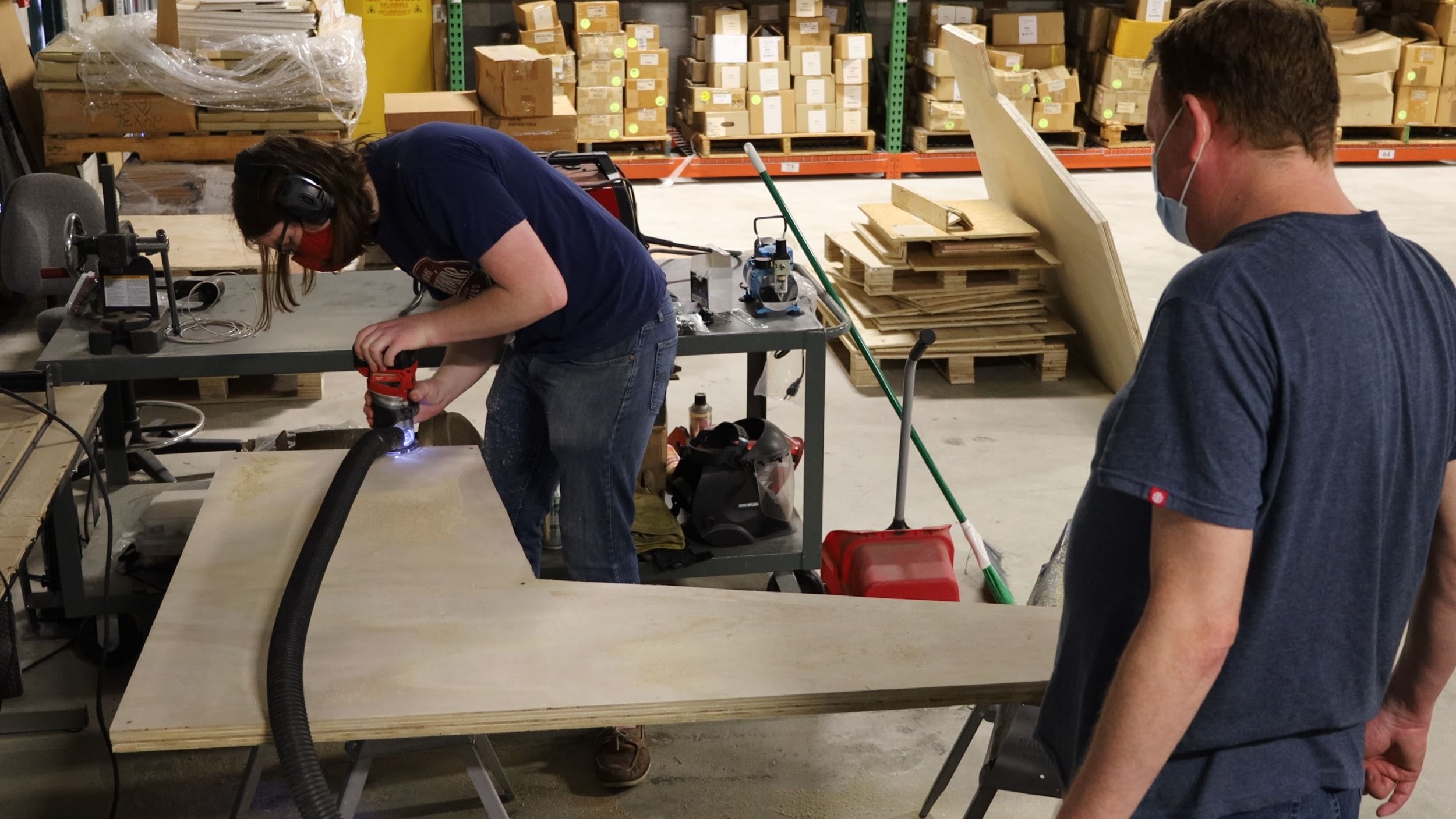 After I finished that the next step was to split the boards into their bottom and top sections for assembly. I did not go over these edges with a router as since they are going to be meshing in the final assembly any routing would leave potential for a gap in the final product 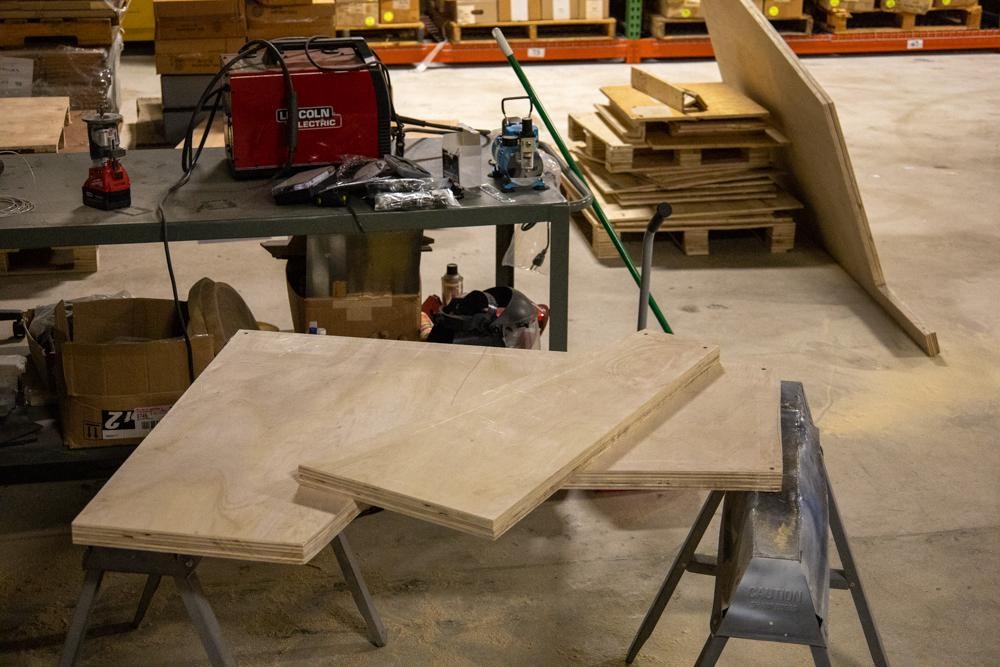 The next step was to use the table saw to rip pieces of wood for the front panel, internal return ramp and bottom panel. After which I started assembling the bottom portion with a Brad nailer. If you do not have a brad nailer finish screws can be used as well but they are not as forgiving if you miss the hole and there is potential for board splitting if your pilot hole is not correct 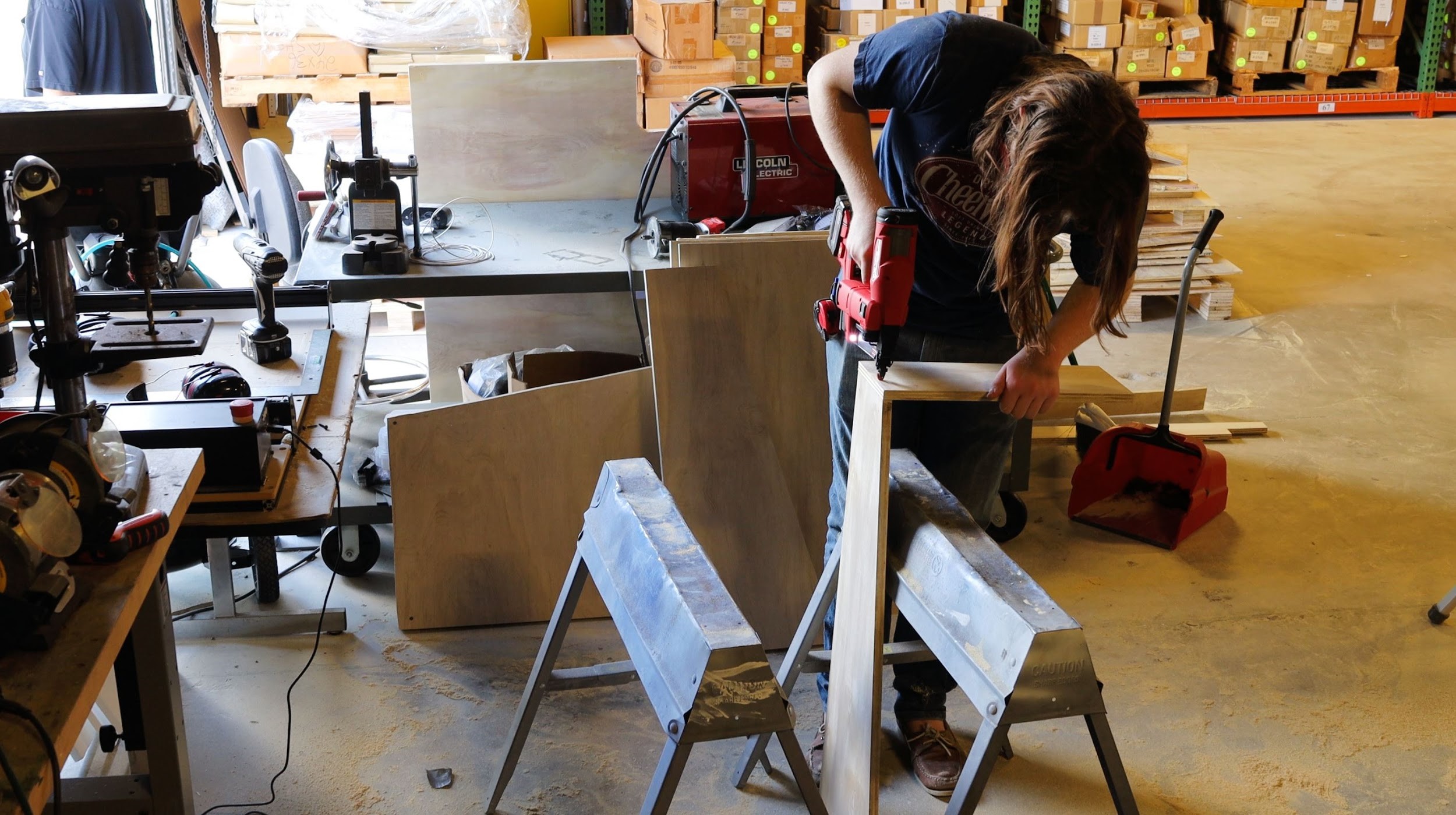 After the assembly of the bottom portion up to this step the next step is to assemble the top half in a similar manner. One thing to keep in mind is that when putting the return ramp in the top half the easiest way to get everything to mesh in place is to set both halves on there sides and then align the tophalf’s ramp board with the bottom halves 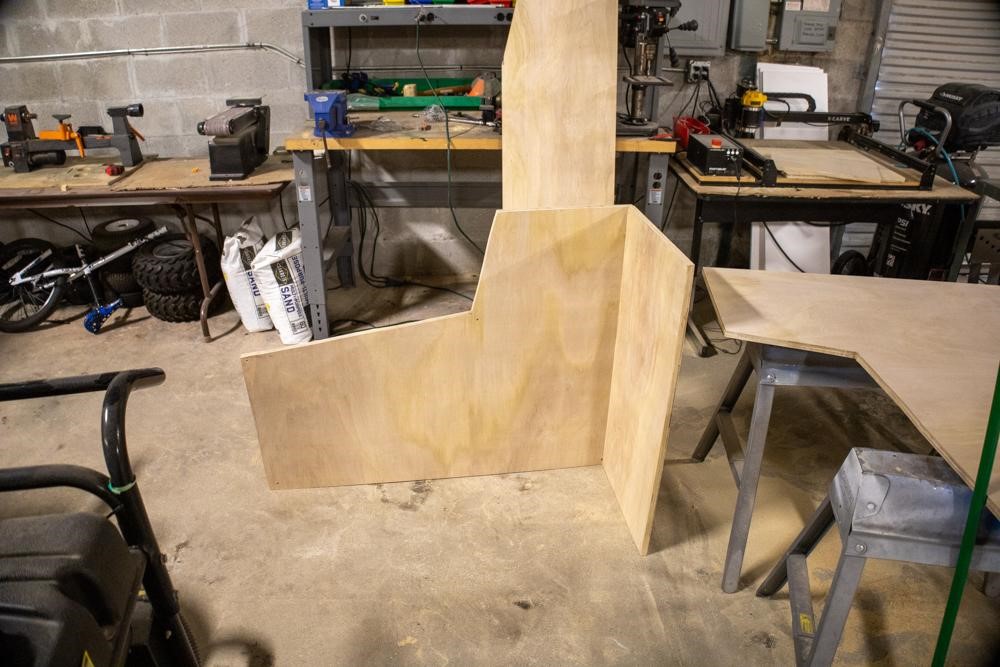 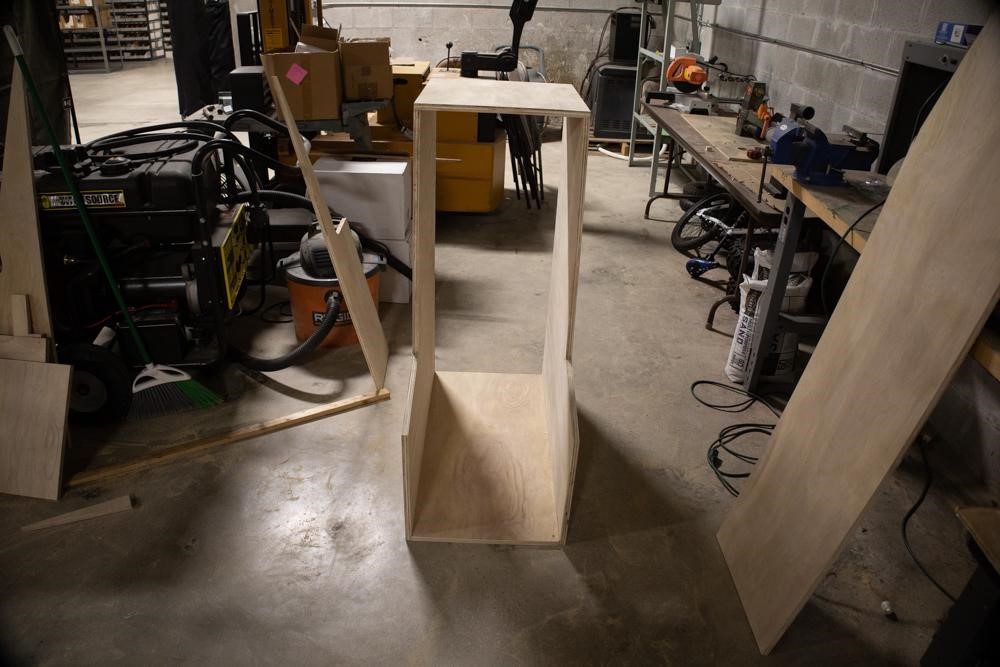 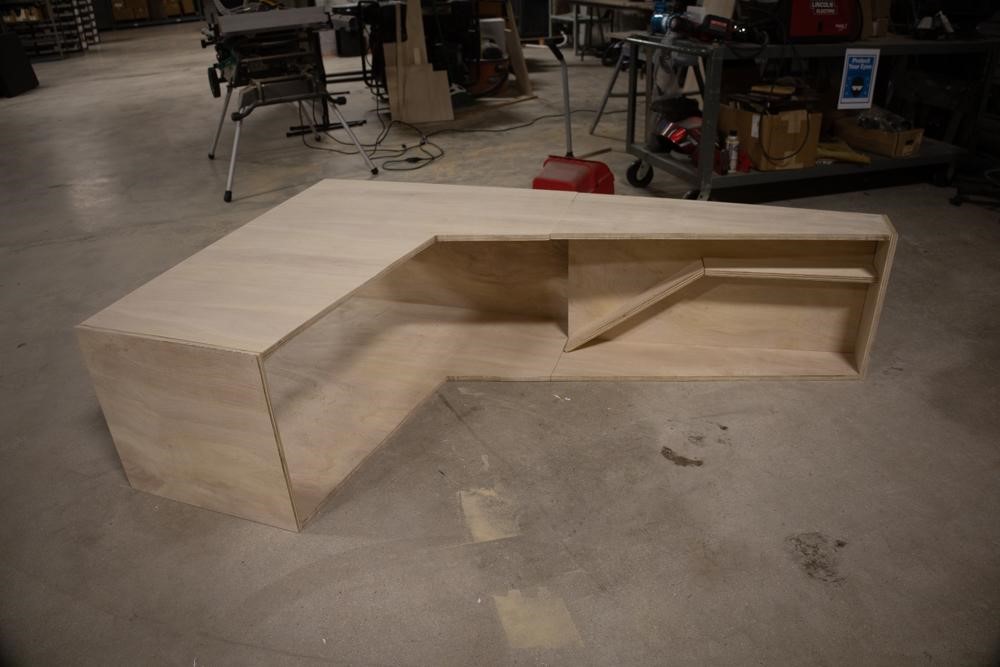 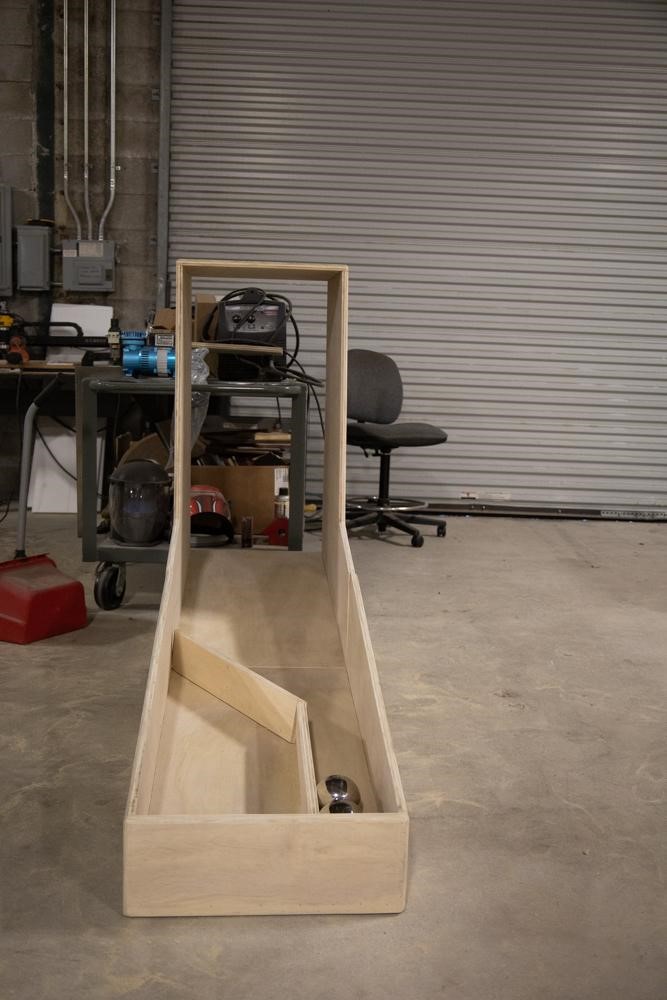 At this point it is now time to start the prepwork for painting. As I was not a fan of the sharp edges of the plywood I took a moment to put a roundover bit on the router and run it around the edge of the frame giving it a nice fileted edge and a more professional look. After this step I went over the entire thing with an orbital sander starting with 120grit sandpaper and working up to 320grit for a nice smooth surface for the paint to adhere to 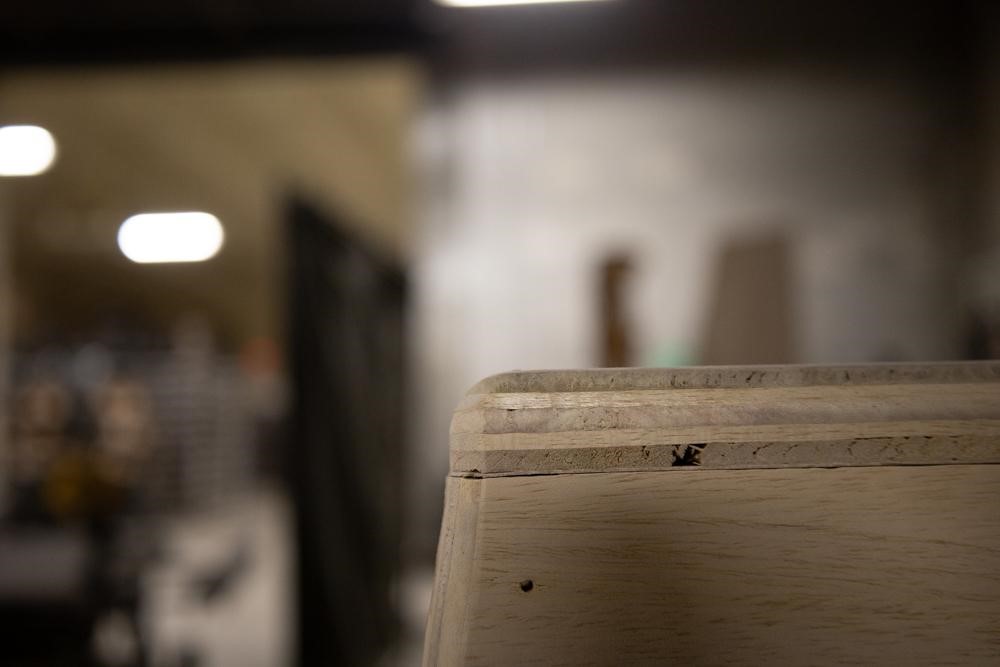 Once all the sanding is done it is time to start painting parts with their respective colors, which will be covered in the next blog update